On Saturday, I had the pleasure of volunteering at Pocasset Cemetery in Cranston, Rhode Island for a cemetery cleanup and to reset some toppled stones.  Earlier in October, the dedicated individuals who regularly volunteer at the cemetery and serve on its board discovered that someone had been dumping large branches, small trees, and other yard waste right on the cemetery paths.  In addition, numerous stones had toppled over, some with time and others through vandalism.  You can read more about these occurrences here. 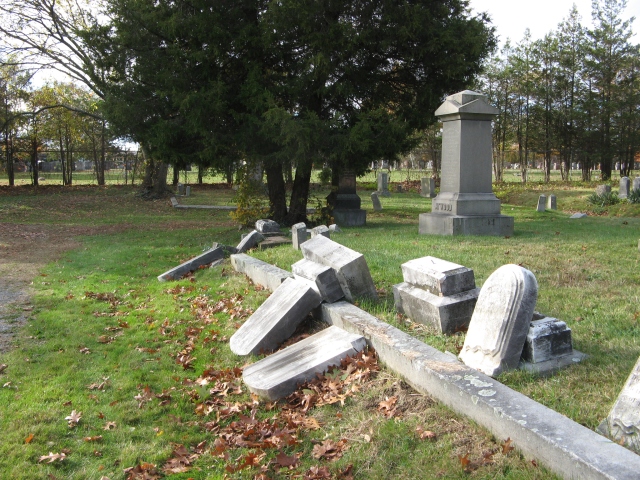 When I showed up at the cemetery, I was immediately whisked away by members of the Johnston Historical Society and its Cemetery Committee and taken further into the cemetery where a group of us erected a few of the stones that had toppled over, some which had broken as a result.  Members of the Cranston Cemetery Commission were also a part of that group.  They were a delightful bunch, and I was impressed by the tripod that someone in the group had made himself to upright heavy stones.  There were two other groups of people elsewhere in the cemetery resetting stones too, some people from Smithfield, another from Newport, and one more from South County.

Setting up for the first stone

Moving on to another stone

I then moved to the back of the cemetery to help a high school student raking leaves and clearing branches for community service hours needed to graduate.  In just a couple of hours he filled 10 bags himself, and together, along with a member of the Warwick Historical Cemetery Commission we filled another 12 by lunchtime.

Lunch was a yummy pizza from I don’t know where and baked goods made by some members of the cemetery’s board.

The weather was perfect for this event and it was wonderful meeting new people with similar interests.  I look forward to a continued relationship with Pocasset Cemetery at further cleanups.

For more pictures, head on over to the Preservation and Place Facebook Page and look for the Pocasset Cemetery photo album.

Tell me what you think Cancel reply